After a winning sequence of four wins in a row against the Blues, the Saints blotted their copy book with a ten-point loss in the penultimate round of 2019.

It was the first and only meeting between the two coaches, so David Teague has the ascendancy at the moment, although the earlier 2019 encounter – with two different coaches – went the Saints’ way.

Those with a sense of history will be well aware that the ascendancy has always been with Carlton since way back in the first year of VFL (1897), when the Saints won no games and finished bottom, and the Blues won two games and finished second bottom.

The Blues have won more games against St Kilda than any other team, and have a win ratio of nearly 75 per cent or three out of every four games. This ratio was even higher until the first decade of this century when St Kilda put together a winning sequence of 12 games against the Blues, who at this time had lost their way.

The Saints are warm favourites for the game by virtue of their seventh position on the ladder compared to the Blues’ 12th position, but both teams are on eight points with a percentage differential of 15.2 per cent. There are six other teams on two wins and they fill positions six to 13, so a win is vital for both clubs with (hopefully) 12 games left in the season after this round.

St Kilda appear likely to have skipper Jarryn Geary back after missing the last two games and he will be a welcome addition to the team. 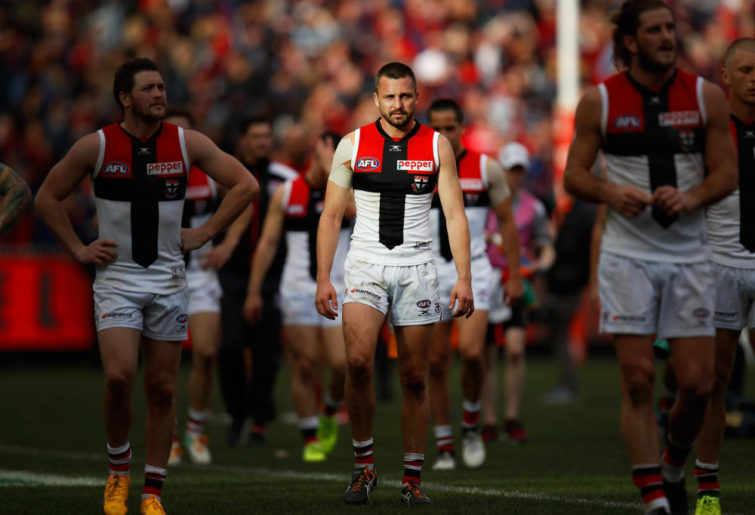 It will be Geary’s 191st game and it will draw him level with David Grant, who played his first game as a 17-year-old in 1984. The (now) 53-year-old former South Launceston player played an additional seven games for Melbourne in 1996.

The Saints’ only other top 100 game player playing at present is Sebastian Ross, who this week will equal the tally of games of Cyril Gambetta, the bow-legged recruit from Sandhurst in the Bendigo league. Gambetta started playing for the Saints in 1922 and – in 1925 – won the best and fairest.

Simpson also – with teammate Marc Murphy – holds the records among current players for the most-times teammates, and they are already on the all-time top 20 list.

There is one other record that Simpson is in line for, but will be keen to avoid: if Carlton lose this week, he will join former Fitzroy champion Kevin Murray as the player who has played in the most losing games in his career (208).

The other veteran at Carlton, returned goal kicker Eddie Betts, is also moving through the ranks of game players at both AFL and club level. At AFL level he will join Bombers great Dick Reynolds in 47th place on the AFL top 100 on 320 games, and at Carlton he will pass Bob Green, who played in Carlton’s 1938 premiership as a wingman but unfortunately died when hit by a car at a tram stop in 1949, aged 38.

He will also pass colourful former full forward Brendan Fevola, and draw level with Brett Thornton and Bruce Comben, a twice best and fairest winner and captain for three years. Comben had the dubious distinction of captaining the only Victorian team that was beaten by Tasmania.