“If I’m being honest I am not one of those who people would necessarily associate with being the next England captain. But I’m really looking forward to the opportunity. It is a huge honour”

“Nine slips and a gully,” quipped Ben Stokes when asked on Monday afternoon what he would be like as England captain.

Of course, the all-rounder, who showed tremendous nous to inspire England to a World Cup win over New Zealand and a remarkable Test victory over Australia during a glittering 2019 summer, will be far savvier than that if, as expected, he temporarily takes over from regular Test captain Joe Root for the series opener against West Indies from July 8.

Root is set to miss the match with his wife Carrie expecting their second child, giving his talismanic deputy the chance to step up as England’s international summer finally begins following the coronavirus pandemic.

And, as you would expect from someone who never shirks responsibility, Stokes is eager to have a big input in the side that is selected, even though his tenure may only last one game.

“I haven’t set out to want to be a captain and, if I’m being honest I am not one of those who people would necessarily associate with being the next England captain. But I’m really looking forward to the opportunity to do it. It is a huge honour,” the 29-year-old told reporters from the team’s training base at The Ageas Bowl, also the venue for the first Test.

“When crunch comes to crunch then I would quite like to have a decent say in terms of the final XI that will be walking out onto the field.

“I feel we are in a situation like the one-day team before the World Cup where you could pick 16 guys for the XI which is a great place to be. First game in charge, if everyone’s fit, I might not have as many friends!”

Stokes won plenty of friends after his 2019 heroics and has become an integral part of the England side since giving notice of his talent and ticker with a century in his debut Test series, against Australia during his side’s harrowing 5-0 Ashes thrashing in 2013-14.

In his 63 Tests to date, there have been some dazzling highs – including Headingley last summer and also Cape Town twice, in 2016 when he smashed a rollicking 258 from 198 deliveries and then earlier this year when he bowled tirelessly to take the final three wickets and secure victory over South Africa late on day five.

Stokes says he will not stray from the “positive route” when captain, although vowed to include plenty of players in the decision-making process.

“Pressure comes with the added responsibility of being the captain. If the other team is putting a big partnership on, you are the person who makes the decision as to how to break it.

“I don’t think being in charge is going to change how I go about things or want to influence the game, which is to try to have a positive effect with bat or ball. Whatever I chose to do I think it will be the positive route. I always try to set the example in terms of attitude and commitment.

“As you play more games, you become more comfortable and confident in putting your views across. When senior players take on that advice and appreciate what you are saying, you realise you are becoming a senior member of the team.

“I have thought about the game outside of what I do and matured as a player. I think that is why I find myself in this position that if anything does happen to Joe I will be in charge. 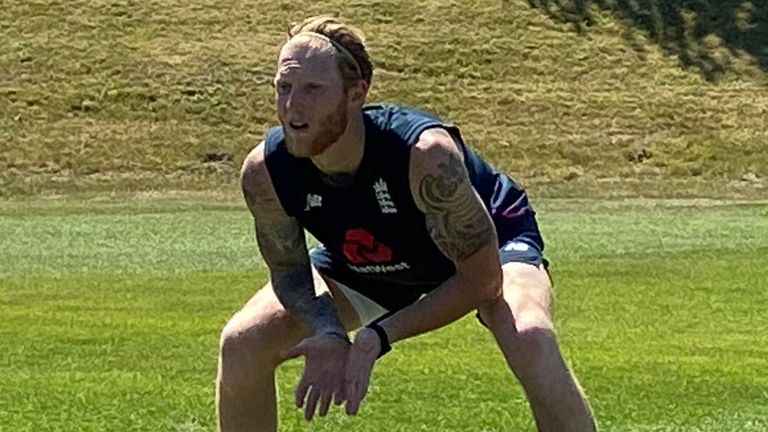 Huge credit to the West Indies players and the cricket board for pushing the series through. There were stages during lockdown where I thought we weren’t going to have any cricket in the 2020 calendar. To be getting out on the field in July is very special. I think that’s a win in itself.

“I have been a senior player since 2016 and been able to learn from Alastair (Cook) and Rooty which has rubbed off on me and will put me in good stead for all the different situations a Test match can throw at you.

“At the same time, we have got some really experienced guys out on the field who I can use. Jimmy (Anderson) and Broady (Stuart Broad) have got ample Test matches and wickets between them and there are so many people you can throw ideas off.

“I would like to think I’d be an open captain and wouldn’t just think my way is the only way. I don’t think that is the best way to operate. There are 11 guys on the field so why not get 10 other opinions?”

The player Stokes may find it most difficult to manage could very well be himself.

The Durham man is frequently Root’s go-to guy with the ball – Cape Town in January was a prime example and so was his indefatigable spell against Australia at Headingley last summer as he ensured England kept their victory target down to something manageable.

So, how will he fare if he has to decide when he bowls?

“If it’s flat I will just chuck the ball onto Jofra, Jimmy and Broady and say on you go!” said Stokes, who revealed the one perk of lockdown has been spending some “quality time” with his family.

“If I am in really good rhythm and don’t want to be taken off Joe looks at me as to say ‘one more’ – and he’ll say that for another four or five overs.

“I might have to be a little bit more mindful if I am the one making that decision but if I have the ball or bat in my hand, I would like to think I will have the same mentality as I always do.”

Stokes won’t be able to use a vociferous England support to pump himself up against West Indies, with the games being staged behind closed doors but the all-rounder says he and his players will not lack for motivation.

“I don’t think it’s a struggle to get yourself up for playing for England but I think the crowd gives you an extra bit of energy,” added Stokes, who said discussions with West Indies are ongoing over how the teams can jointly support the Black Lives Matter movement during the series.

“Using Cape Town as an example, that last day when all the Barmy Army was there it felt like a home game. That got everybody on the field buzzing.

“I don’t think we can use the fact there won’t be a crowd as an excuse for our levels of intensity as we are representing England, which thousands of people would give their right arm to be able to do.

“Whether that’s in front of a full house or no crowd, it shouldn’t matter. You have got the Three Lions on your chest.”

No excuses – exactly what you’d expect from a Ben Stokes team.