“I think it will be strange in the warm-up. You are used to the big build up and the big nerves with all the people there. But when the first ball is bowled I think it will be back to normal. You are concentrating so much that the crowd doesn’t really come into it”

Ben Stokes will have “no problems” when he captains England in the first #raisethebat Test against West Indies, says team-mate Zak Crawley.

Vice-captain Stokes will step up to lead the side at The Ageas Bowl from Wednesday, with regular skipper Joe Root missing the match in order to attend the birth of his second child.

The 29-year-old will become England’s 81st men’s Test captain – and the first all-rounder to take charge since Andrew Flintoff – but Crawley says Stokes is always a spearhead for the side.

“Ben is already a big leader in the team, so he is not going to have any problems leading in the first Test,” Crawley – likely to bat at No 4 in Southampton – told Sky Sports Cricket’s Rob Key.

“He has played a lot of cricket and is a very experienced player so he is going to be a very good captain.”

Crawley was speaking on an England vs West Indies preview show which you can watch from 7.45pm on Monday on Sky Sports Cricket. You will also be able to listen to the show as a podcast from Monday afternoon.

Stokes captained Crawley in England’s internal three-day warm-up match last week, when their team drew with a side skippered by Jos Buttler.

Crawley made 43 and 34 batting at No 3 in his first hit since notching a century in a practice game in Colombo in March ahead of England’s Test tour of Sri Lanka being postponed due to coronavirus.

The Kent star, 22, had to face England’s quickest seamers Jofra Archer and Mark Wood at The Ageas Bowl – Wood pinning him lbw in the second innings – and says the duo looked in excellent shape.

“It didn’t feel as strange as I thought it would. Ben said at the start of the game that he wanted it to be really competitive and I think it was,” said Crawley, who averages 27.33 from four Tests.

“All the bowlers got a good run out, so it was as good as you are going to get in terms of a warm-up game in preparation for the Test matches.

“[Wood and Archer] were bowling with good pace, and in the nets. They both look pretty fresh and it’s good that Jofra’s elbow has recovered now and he is back fully fit.”

England’s Test series with West Indies will be played without fans in attendance due to the coronavirus pandemic.

Crawley does not expect that have too much of a bearing, while he also says he has no preference over where he bats despite having opened in three of his four Tests to date. 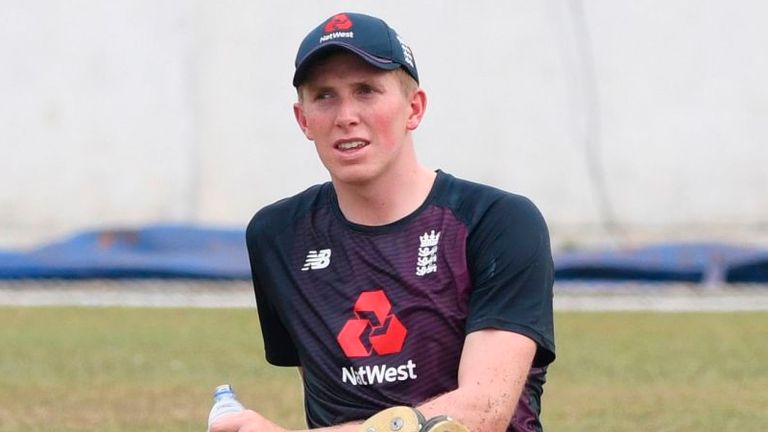 We did have a very large squad to start with so had to mix up the players – half training in the morning, half training in the afternoon. It was pretty boring on that half when you weren’t training! Now the West Indies are here so we have had to split up the days again. I would have liked it to be training 24/7 but that’s part and parcel of what we’re in.

Zak Crawley on training in a biosecure environment

National selector Ed Smith suggested on Saturday that the fit-again Rory Burns will open with Dom Sibley, with Joe Denly sticking at No 3 and Crawley moving down to No 4 to fill the gap left by Root.

“I think it will be strange in the warm-up – you are used to the big build up and the big nerves with all the people there,” Crawley said of playing a Test behind closed doors.

“But when the first ball is bowled I think it will be back to normal. You are concentrating so much on what you are trying to do in the game that the crowd doesn’t really come into it.

“I’ve batted everywhere so I don’t have a preferred spot. I have been opening the last couple of years so I suppose that’s where I have had most success but maybe if I had batted at No 3 I would have got a lot of success there as well.

“West Indies have a very good bowling attack – I have seen quite a few of them on TV and played against a couple of them when Kent toured Antigua.

“I’ll definitely be looking at footage and pick up some tips here and there but in general I’m not one for watching too much footage.

“I’m definitely looking forward to it. Any chance to play a Test match is a great opportunity.”