How ‘quarterback’ Rooney is inspiring Rams

Derby were 17th in the Championship table when Wayne Rooney made his debut at the turn of the year. Now they are seventh – just a point off the play-off places.

A stunning free kick against Preston on Wednesday – Rooney’s fifth league goal for the Rams and sixth in all competitions – secured a fifth successive victory for Phillip Cocu’s side to continue a promotion charge that looked implausible in January.

Derby, who face fierce rivals Nottingham Forest in front of the Sky Sports cameras on Saturday, are flying – and the former England international is proving their inspiration in a new, deeper-lying role.

Derby’s average points and goals per game have doubled since Rooney, Manchester United and England’s record goalscorer, arrived on an 18-month player-coach contract at Pride Park after finishing a second MLS season at DC United.

He is sparking attacks from deep, setting the pace of games, but raising the levels of those around him, too.

Midfielder Louie Sibley has explained how Rooney has encouraged him to “play without fear.”

“I’ve been taking the advice he’s been giving me,” the youngster said recently. “He’s been great with all the young lads.”

“He just brings a calmness to the team,” says striker Martyn Waghorn. “You can give him the ball in any situation whether teams are dropping off him or if he is surrounded by two or three players, and you know he is going to make the right decision.”

“We saw what Rooney himself can do with that free kick against Preston, but it’s also what he has brought to the young players around him as well, the influence he is having as a person on those around him, too.

“Derby in the past have spent big money and wages bringing players in, but they have invested a lot in their academy, and Max Bird and Louie Sibley have been outstanding. The structure of the team has been a lot better, the young players are excelling and if Rooney wants to go into management, that is what he has to do, inspire people around him, both young and old.”

“I would liken his impact to Bruno Fernandes at Manchester United,” said Sky Sports‘ commentator Gary Weaver, joining Hinchcliffe on the EFL Podcast.

“I did a game at Old Trafford before lockdown and Ole Gunnar Solskjaer said Fernandes has lifted the quality of the players around him. Rooney has done the same. Players want to show him what they can do and he’s lifted the level of every player at Pride Park.”

‘He dictates the flow, the tempo – he’s a leader’

Derby first-team coach Liam Rosenior lifted the lid on Rooney’s impact on the pitch and training ground when he spoke to The Football Show in June.

“He’s an outstanding player. You don’t realise how good he is until you work with him every day.

“He’s not a striker anymore, he’s a deep-lying midfield player – almost like a quarterback. He dictates the tempo, the flow of the game. We want to play from the back and dominate possession and he’s become a key part of that.

“What’s been great for me to witness is his effect on the other players around him. His standards in training and what he expects from others, it’s been a joy working with him.

“He came back from Washington and had a month’s break but he wanted to come straight in and get to know the lads. What shocked the players – it didn’t shock me – was his determination and drive to win. You need to be around it; it makes you a leader and winner.

“He’s not a big talker – he does it on the pitch; he’ll have little one-on-one conversations – but he lets his football do the talking. We needed more leaders and characters, especially for the younger players. You need to have that competition, that winning ethic every day in training and Wayne brings that in abundance. It’s lifted everyone in the squad.”

Analysis: How his role works

Debates raged about whether Rooney was a forward or midfielder during his final years at Manchester United after he was handed a deeper role under Louis van Gaal – but Sir Alex Ferguson had spotted that quality and used him to cover midfield injuries as far back as 2011.

At the ripe age of 34, Rooney is now doing exactly what Mourinho vowed against: dictating games 50 yards from goal, while also joining the attack to reveal flashes of his former role.

“Earlier in the season I was watching Derby and I couldn’t see what identity they had and what Phillip Cocu was trying to do,” Andy Hinchcliffe said. “But now it’s 4-2-3-1 with Rooney in the team and lots of energy. You can see what the plan is.”

As the graphic below shows, Rooney’s position has ebbed backwards since his swansong stint at Everton in 2017/18, when he had already moved into a deeper position.

The majority of his passes are now made centrally or down the left channel inside his own half and the direction of those passes are almost exclusively upfield. Even at Everton two years ago, almost half of his passes were directed backwards or sideways.

The graphic below reveals the audacity of Rooney’s long passes in the Championship with Derby, attempted from inside his own half and ending in the attacking third. Only four of these were played across the turf. His ability to launch high, raking passes with pinpoint accuracy over defensive lines is being utilised fully in these twilight years. 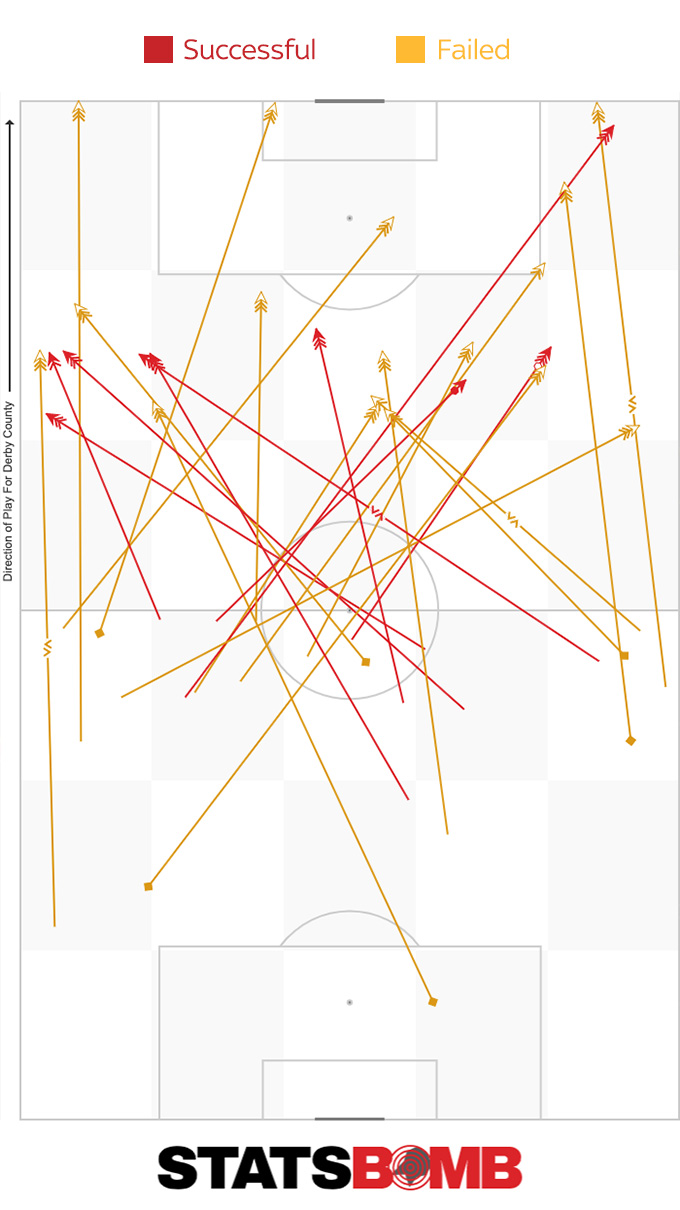 Despite this, five league goals (including two penalties) from only nine shots on target and 18 chances created (including two assists) from just 14 league starts is impressive for a player who spends the majority of games on the halfway line or deeper.

Will Derby gatecrash the play-offs?

Win against old foes Forest and Derby will climb sixth – for a few hours at least.

Their odds for promotion have shortened to 22/1 with Sky Bet – and while a forthcoming fixture schedule including West Brom, Brentford, Cardiff and Leeds looks brutal, the Rams’ fate is certainly in their own hands and only Brentford beat them in the reverse fixtures.

“If Derby continue in this form, you won’t be surprised if they finish in the play-offs, and that will be some story,” Sky Sports’ Andy Hinchcliffe told the EFL Podcast.

“They’ve got five of the current top six left to play, which is tough, but with the form they are in the sides they’ve got to play will be more worried about Derby than Derby are about those teams.

“They are a team you simply don’t want to play at the moment.”