Canterbury coach Dean Pay is hoping the return of veteran prop Aiden Tolman will add the defensive steel his team needs to turn their NRL fortunes around.

Tolman is set to face the Wests Tigers on Sunday for what will be his first game since isolating for two weeks due to a COVID-19 scare at his child’s school. The Bulldogs missed the experienced front-rower in last week’s two-point loss to Cronulla – their fifth defeat from their opening six games of the season.

But after getting cleared of the virus again this week, Tolman rejoined his teammates for the first time on Saturday and will line-up at Bankwest Stadium.

Pay is banking on his return, as well as the improved play of stars Kieran Foran and Will Hopoate, to end their two-game losing streak with a win over the Tigers.

The Bulldogs are also aiming to rectify their problems at the ruck, having conceded a league-high 21 set restarts since the introduction of the new rule.

“Foz is getting better each week. Hoppa’s doing a good job at the back. And we missed Tols a fair bit last week, more defensively than anything,” Pay said.

“Hopefully we can defend a little bit stronger, we don’t get as many six-agains against us, we can control the ball and add a little bit of pressure to them.” 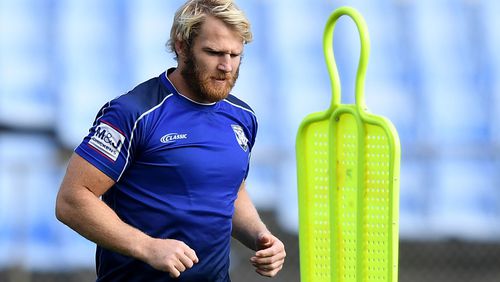 Canterbury face a Tigers side that are on the cusp of entering the top eight following their high-scoring victory over North Queensland last week.

However coach Michael Maguire has been forced to make three changes, with Alex Twal, Robert Jennings and Zane Musgrove all out.

Elijah Taylor, Oliver Clark and Tommy Talau are in the 17.

“We’re looking for consistency in the way we play,” Maguire said.

“We’ve ebbed and flowed…in my time, we’ve got to make sure that we change that. That’s what we’ve got to focus on, to be able to get a real strong, consistent performance. When we do that, we’re a very strong team.”

* The Bulldogs have won 12 of their past 16 against the Tigers.