It was the day which ended up becoming part of rugby league lore, and a match in which Gareth O’Brien carved his name in history. There was also a sub-plot involving coaching personnel which meant both teams were intertwined.

It was, of course, the 2016 Million Pound Game – which is the latest match to feature in the Rugby League Retro strand on Sky Sports Arena this Friday.

‘I just had that belief in the players’

To understand how it came down to that fateful October afternoon, it needs to be remembered what led to Salford finding themselves in that situation in the first place.

The Red Devils had earned enough wins to qualify for the Super Eights phase of the Super League season, but a six-point deduction as punishment for being found guilty of salary cap breaches led to them being consigned to the relegation fight.

Defeats to Championship sides London Broncos and Leigh Centurions in the Qualifiers left them up against it as well, although a 42-14 win at home to Batley Bulldogs ensured they would take the battle for survival to the final match of the season.

Watson, who was in his first full season as Salford head coach, admits that points deduction was a psychological blow which the squad took several weeks to get over.

“We’d spoken at the start of the year how we wanted to be a Salford team that got away from competing at the bottom end of the table,” Watson said.

“We wanted to be a team everybody knew could compete at the top end of the table, so to have what happened obviously affected us.

“The players couldn’t get their head around that on their terms they should have been in the top eight but had to deal with a new set of circumstances they felt they weren’t responsible for. 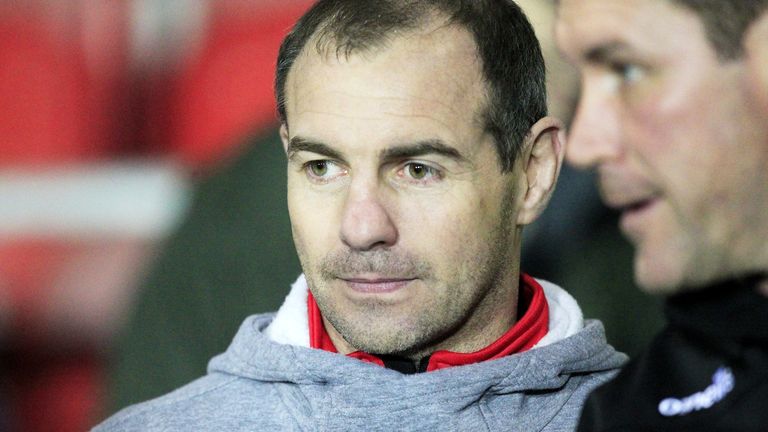 The players couldn’t get their head around that on their terms they should have been in the top eight but had to deal with a new set of circumstances they felt they weren’t responsible for.

“It took us a fair bit of time to get over that mentally and it was the Batley game before Hull KR than we seemed to come through it there more than anything.”

Their opponents in the Million Pound Game would be Hull Kingston Rovers and to add to the level of intrigue, it had emerged several weeks earlier that Red Devils director of rugby Tim Sheens would be joining the Robins the following year.

The Australian had chosen to step back for the crunch clash at Craven Park and with around 10 minutes to go it looked as if he would be leading Hull KR in Super League the following year as they held an 18-10 lead.

Even the Red Devils’ ebullient then-chairman Marwan Koukash was questioning whether Salford’s time in Super League was coming to an end, but Watson knew otherwise.

“I think Marwan came down to the edge of the pitch just before 10 minutes were left and he reminded me of it when we were speaking last year,” Watson said.

“He was thinking it was done and I said to him ‘It’s not over yet’ – I just had that belief in the players.”

Looking back nearly four years later, Watson is full of praise for the players who did it tough that day. Players like try-scorer Ben Murdoch-Masila, who came back onto the pitch to help despite struggling with injury, and Luke Burgess and Mark Flanagan for their leadership qualities.

But it is Niall Evalds and Greg Johnson who are remembered for their unconverted tries in the closing stages which saw the Red Devils force golden point extra-time – the latter coming on the final play of normal time.

Then, having missed the conversion from out wide to win the match barely one minute earlier, Salford full-back O’Brien launched a drop goal attempt from over 45 metres out which sailed over to snatch an improbable victory.

“You see him do things in training, but I don’t think he’d even practised one from there in training,” Watson said.

“I just remember Weller [Hauraki] getting a decent play-the-ball and thinking get a good kick on the back of it, defend it and kind of force the error. 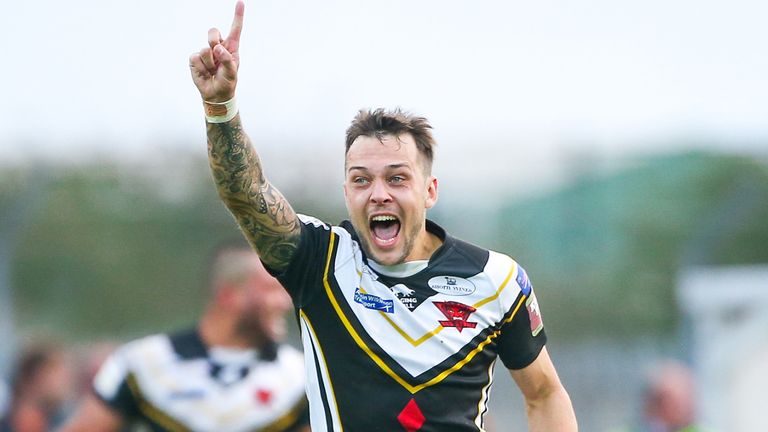 It was one of those where it was off-the-cuff, adrenaline pumping and he’s hit it – it was still travelling as it went through the posts, to be fair.

“But Gaz stepped up and has done what he’s done, and as I said at the time, I don’t think that will ever be repeated in that situation again – and obviously it was a massive bonus for us and the club.”

O’Brien’s drop goal sparked a pitch invasion from the travelling Salford fans, including Koukash joining them on the field with a giant novelty £1M cheque while Watson’s opposite number James Webster and the Rovers players and fans were left numb.

Watson revealed both teams had originally agreed not to celebrate whatever the outcome ahead of the match, but believes the circumstances of the win and the relief at coming through such tense circumstances led to the outpouring of emotion.

“I remember speaking to James Webster before the game and saying we’d spoken as a group and said ‘what will be will be, we won’t be celebrating this’, but the emotion overtook everybody and just the way it happened,” Watson said.

“I don’t think you could have had a better finish – it would have been better if it were a Grand Final, to be fair.”

Rovers would go on to win promotion back to Super League at the first attempt the following year, while Salford reach the Challenge Cup semi-finals and missed out on the Super League play-offs by four points before the squad was broken up over the off season due to retirements and transfers.

A rebuilding job in 2018 was followed by last year’s against-the-odds run to the Grand Final with Watson again at the helm. It could be argued, however, the seeds for that were sown on a certain fateful day at Craven Park.