The Wests Tigers have reeled off three wins in a row for the first time under Michael Maguire after trampling over Canterbury 34-6 at Bankwest Stadium.

In what was arguably their best performance of the season, wingers David Nofoaluma and Tommy Talau shone with two tries each. Hooker Harry Grant was another standout, scoring a try after a Bulldogs error by beating four defenders.

“Madge [coach Michael Maguire] is pushing us to be a team that plays fast and once we get them on the back foot just keep going at them ,” Grant told Fox Sports post-game.

“Tonight we were really focused on putting the 80 minutes together and we did that.” 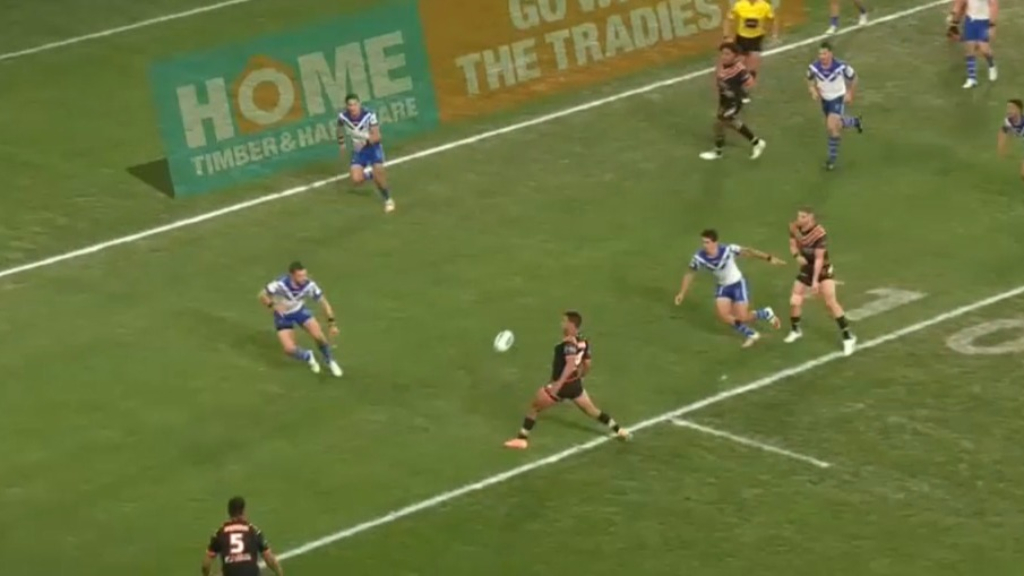 The victory lifts the Tigers to sixth spot, and goes a long way to justifying Michael Maguire’s decision to axe Benji Marshall and Chris Lawrence in recent weeks.

The win also marked Maguire’s 100th NRL win as a coach, while counterpart Dean Pay will again come under pressure for their latest heavy defeat.

“It’s the 80 minutes that we’d been talking about. It’s how we back it up now. Obviously we’ve been speaking about it for quite some time,” Maguire said.

“We’ve been able to do that.

“But it’s what you do next that’s the big thing that matters to all of us.”

The Bulldogs remain rooted to the bottom of the ladder with just one win. Pay’s men were barely in the contest from the moment they lost Will Hopoate to an ankle injury in just the fourth minute. And while they scored the opening points through Reimis Smith in the 18th minute, the Tigers replied almost instantly through Grant.

The Tigers were rarely threatened thereafter, taking the lead when Talau made the most of a dropped Luke Brooks bomb to post his first career try. 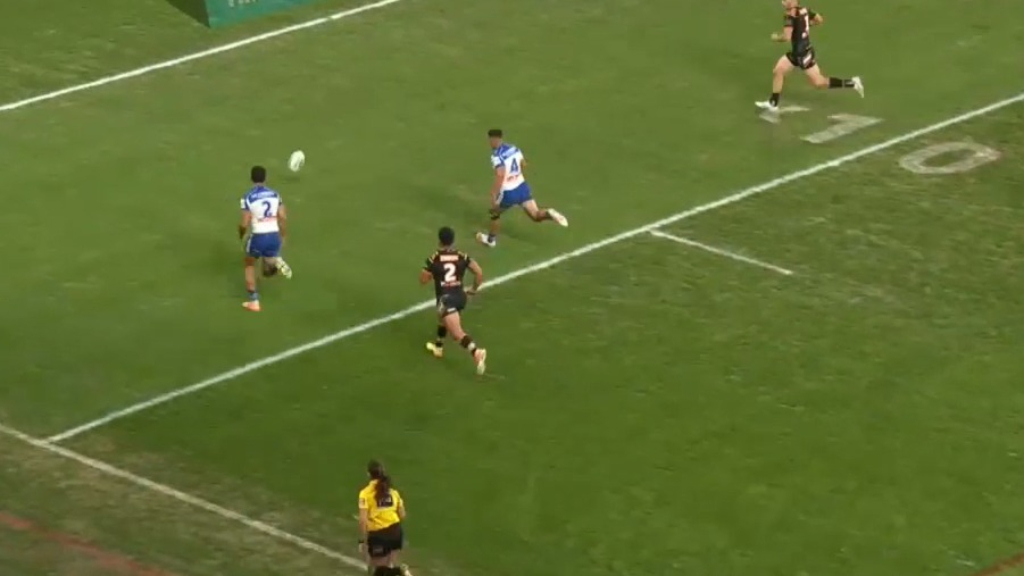 The four-pointer came 22 years after his father and former Bulldogs centre, Willie, scored the first try of his career against Western Suburbs.

Tigers centre Joey Leilua made it a two-try lead at the break when he crashed over from close range, before Talau produced the highlight of the night.

The 20-year-old had almost his entire body airborne over the sideline but planted just inside the corner post with his left hand for a memorable moment.

“That was pretty special from the young winger.

“Look at Talau able to hang onto that ball with one hand!” 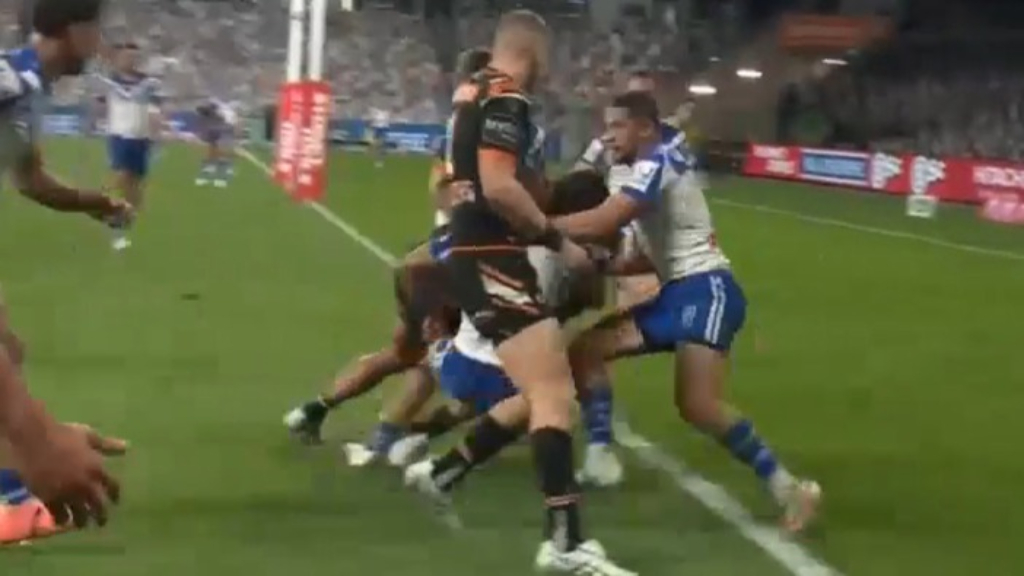 The Bulldogs were cannon fodder for rest of the game, with Nofoaluma putting their opposition away with two tries in the space of seven minutes.

The first came when he intercepted a Kieran Foran pass to race 30 metres, before he finished off a Luke Brooks line break in the 61st minute.

Tigers fullback Adam Doueihi, who was denied twice in the second half, put the finishing touches on with their seventh try in the 74th minute. 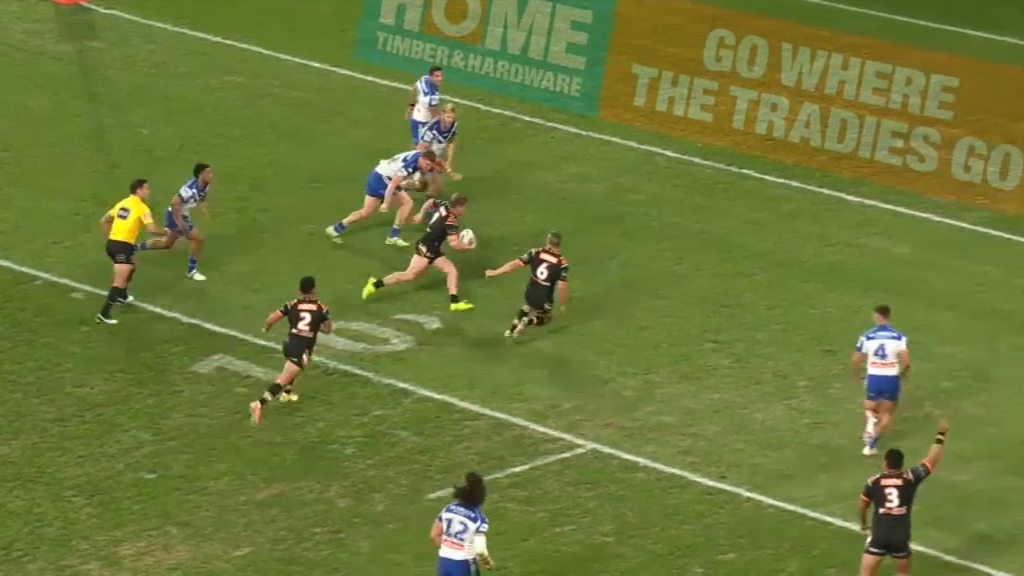 “First 20 minutes we competed really hard and got through our sets. We done some good things there, but after that, it wasn’t good,” Pay said.

“Obviously losing Hoppa hurt a fair bit. We finished up with Adam Elliott playing in the centres and lost Jake Averillo as well. There’s a few things that went astray.

“But at the end of the day what we come up with wasn’t good enough.”

Will the Waratahs taste Super Rugby success in 2021?