LAS VEGAS — Even with so much going on, in so many weight classes, the 155-pound division is still the UFC’s biggest draw.

And that’s saying a lot. The UFC is extremely intriguing right now. There will be a teammate vs. teammate title fight going down at welterweight next month. There’s a heavyweight trilogy to be settled. Middleweight champion Israel Adesanya could be the sport’s next superstar, and the unbeatable light heavyweight king, Jon Jones, has looked human in recent fights.

Saturday’s UFC Fight Night main event is expected to be a slugfest, with top lightweight contenders Dustin Poirier and Dan Hooker squaring off. Poirier won four straight fights before falling to Khabib Nurmagomedov in September, and Hooker has won three in a row.

Those are just a few of the storylines swirling around the sport. But at the end of the day, the most burning questions in mixed martial arts still involve the UFC’s lightweight division.

This weekend’s UFC Fight Night main event at the promotion’s Apex facility will feature former title challenger Dustin Poirier (25-6, 1 NC; 17-5, 1 NC in the UFC) taking on New Zealand’s Dan Hooker (20-8; 10-4 UFC) in a lightweight matchup that just about everyone agrees should be pure fireworks. It’s a fight no true MMA fan will want to miss, even if it’s hard to say exactly where the winner will go next.

Why is it hard to say? Because there are some very important unanswered questions at lightweight right now. Namely:

In other words, there’s a lot to speculate on. Granted, speculation is just that. It’s a guess. It’s all fantasy. At this point, it’s unclear what will happen in this division beyond September, when Nurmagomedov and Gaethje are expected to fight.

But as we prepare for an absolutely stellar, five-round main event between two of the best lightweights in the world on Saturday, it is difficult to just completely ignore the questions lingering over the division. Because without those answers, it’s hard to know what the postfight narrative will be, regardless of the outcome.

17: Victories by Poirier since joining the UFC in 2011. That ties him for the second most in the promotion during that time. Poirier’s 11 finishes in the UFC tie him for the third most since 2011.

6.51: Significant strikes landed per minute in the UFC by Poirier, the third most in lightweight history. Hooker is fifth among active 155-pounders, landing 5.75 per minute.

5: Fighters in UFC history who have finished opponents with all four of these strikes: elbows, kicks, knees and punches. Hooker is one of them. The others: Vitor Belfort, Georges St-Pierre, Anthony Smith and Jeremy Stephens.

6: Knockouts by Poirier since joining the UFC’s lightweight division in 2015. It’s the most by a 155-pounder during that time.

1.14: Knockdowns per fight for Hooker, on average, the second-best average among active UFC lightweights. In all, Hooker has scored a promotion-best six knockdowns since joining the division in 2017. 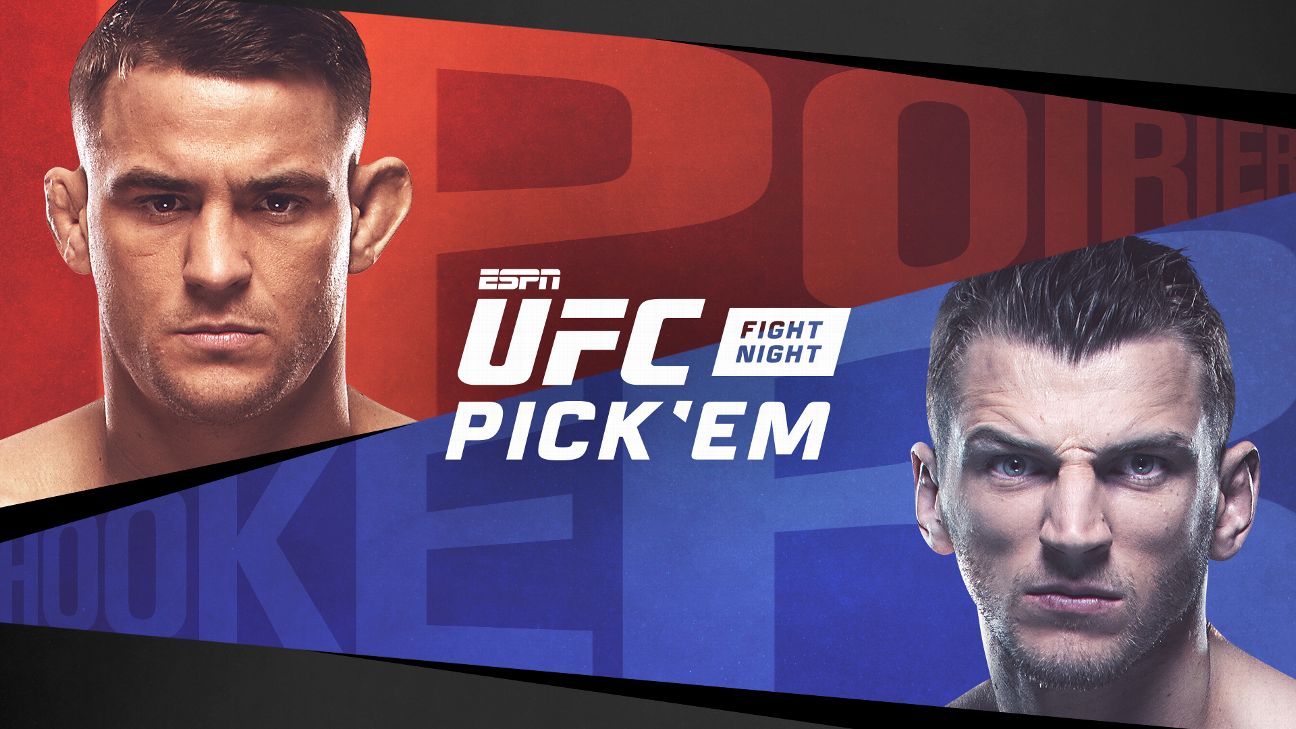 Make your picks, and compete against friends! Watch the action live on Saturday on ESPN and ESPN+. Make Your Picks

I’ll take Poirier. His strength of schedule in recent years is second to none: Gaethje, Eddie Alvarez, Max Holloway, Nurmagomedov. It genuinely does not get any tougher than that. And at some point, one could argue that’s not a good thing — to face nothing but the best back-to-back-to-back. But for right now, I like Poirier’s edge in experience. I like his boxing, his underrated ground game and the fact he traveled a much shorter distance to Las Vegas than Hooker did. This is a very, very competitive fight, but I’ll lean Poirier. Poirier via TKO, third round.

What else to look for … beyond the main event

Is Mike Perry backing himself into a corner?

Mickey Gall has fought all but one of his professional bouts in the UFC. That’s an unusually accelerated career path, but he came to the promotion during an unusual time. WWE star CM Punk had expressed an interest in transitioning from pro wrestling to MMA fighting, and the UFC needed a suitable opponent to welcome him to the Octagon. Gall was the guy.

But if you want to see someone embarking on a particularly odd career path on Saturday, look across the Octagon from Gall to his opponent in the welterweight co-main event, Mike Perry.

After going 2-5 since 2017, Perry has opted to enter this bout with no coaching. He has said the only person in his corner will be his girlfriend, who will hand him a water bottle between rounds and ice down his neck.

Perry has never seemed like the most coachable fighter to begin with. When it’s time to throw down, “Platinum Mike” just throws down. But will going it alone change the course of his flagging career?

Monday through Friday, host Mina Kimes brings you an inside look at the most interesting stories at ESPN, as told by the top reporters and insiders on the planet. Listen

1. Brendan Allen will take on the debuting Kyle Daukaus in a middleweight bout on the main card. Allen enters on a six-fight win streak, including his first two UFC fights, both of which he won via finish. Allen has won 13 of his 14 career fights by stoppage, with eight ending in the first round.

2. Luis “Violent Bob Ross” Pena, who will face on Khama Worthy in the prelims, has won three of his past four fights. Worthy prevailed in his UFC debut against Devonte Smith in August despite being a +650 underdog. That was the biggest upset in the UFC since Holly Holm defeated Ronda Rousey in 2015, and it was only the fifth time in the UFC since 2007 that a fighter had won as an underdog at +650 or greater. If Worthy wins the lightweight bout, he would join Volkan Oezdemir and Kevin Burns as the only fighters since 2007 to win both of their first two UFC fights as an underdog of 2-1 or greater. Worthy is a +220 underdog, per Caesars.